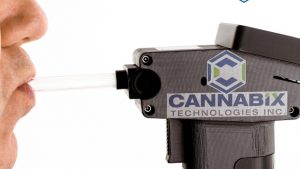 Breathalyzer tests are no longer just for drinking anymore. If you think that the legalization of marijuana means a free for all toke fest without tight regulations, you are mistaken. A new invention will make it possible for police to pull drivers over, and test people for marijuana impairment on the spot, in conjunction with the usual alcohol breathalyzer test. Clinical trials will start next year at Hound Labs Inc.–in Oakland CA. The device will test for THC and alcohol. It will be illegal if a driver tests positive for at least five milligrams of THC in their blood from a breath sample. There is approximately 20 million Americans using marijuana. These devices sell for $1000 or less. It makes good business sense for cities to purchase these marijuana breathalyzer test. Police departments across the country are being charged with the burden of generating revenue for their municipalities. Officers are given ticket and arrest quotas in many places to ensure the city a steady stream of money coming directly from citizens. The city of Ferguson, MO was found guilty of practicing “policing for profit” as a way to generate income. This was done in Ferguson by targeting Black neighborhoods where the people were more vulnerable and not likely to challenge the blatant racketeering.
Marijuana prosecution is seen as a regional issue but has more to do with the racial and socio-economic demographics of where you live.
It’s no coincidence that places with the highest populations of Black and Latinos have the highest rates of incarceration due to marijuana possession.
One can be arrested and imprisoned for marijuana in Brooklyn while people in Colorado will face no consequences.
Marijuana prohibition laws were signed into affect during the 1930s due to racist propaganda that reported Black men raping white women under the influence of marijuana. Similar propaganda was created surrounding Mexican immigrants in the Southwest region of the country. Today, we see this happening in its reverse. Areas, where there are high populations of white and middle class people, are decriminalizing the plant while places with high Black and Latino numbers are keeping these draconian laws under the guise of fighting crime. Marijuana convictions mean big profits for municipal police departments and the bigger prison industrial complex. This is not good news for tax payers. Tax payers will foot the bill for these devices, but the city, and state governments will reap the benefits. As marijuana inevitably becomes decriminalized across the country, these entities stand to lose a major source of income. This new THC breathalyzer is an effort to continue capitalizing on the use of marijuana. There hasn’t been enough research to establish what amount is needed to impair one’s driving.
The test can only detect THC blood levels through the breath. This does nothing to detect whether a driver has used other methods for taking marijuana.
Edibles, as they are called by the emerging legal marijuana industry, are foods made with some form of marijuana. These edibles are known to have the same if not an even more intense “high” than smoking. It’s also true that edibles are typically more expensive than smoking marijuana and is consumed by different demographics than the Black and Latino men who are the usual targets of marijuana prosecution. The edible industry is also a booming one whose growth corporate interest may not want to discourage. Prescription drug abuse is at an all-time high and impairs the judgment of those using it as well. No efforts are being made to curb pill users from driving impaired. Alcohol use accounts for far more car accidents caused by impaired driving. According to the National Organization for the Reform of Marijuana Laws (NORML), seven studies using culpability analysis have been reported, involving a total of 7,934 drivers.
Alcohol was detected as the only drug in 1,785 drivers, and together with cannabis in 390 drivers. Cannabis was detected in 684 drivers, and in 294 of these, it was the only drug detected. There is various resources and research available on the effects of marijuana on drivers, but the federal government refuses to acknowledge these findings as legitimate. They are holding on to the outdated narrative that marijuana is a dangerous drug despite the push to reclassify the plant. Marijuana should never have been criminalized. It was done out of ignorance and prejudice in the first place. Much of the marijuana mythology that exists today come from that dark period when doctors withheld basic birth control/family planning information from women and used electroshock therapy to treat depression. This time of scientific and medical ignorance has influenced much of the false beliefs concerning the plant today. This has lead to police having the nerve to consider using such a ridiculous device to make decisions that could the rest of a person’s life.