What are our state laws?

Marijuana possession and/or sales are not legal in all U.S. states. Although the media tends to highlight places like Colorado and Oregon, there is still a common misconception that the possession and sale of marijuana is legal across the United States.

Twenty three U.S. states embrace the legality of marijuana, whether it’s through recreational or medical markets. Marijuana has gained a bad reputation, and at The Holland Club, it is our goal to change that preconceived notion.

It is a criminal act to use, sell, or manufacture marijuana of any type or configuration in the state of Florida. Currently, in Florida, the law states that, “marijuana is classified as a Schedule I controlled substance,” meaning that law officials in the state believe, that as a drug, it has no medical value and has a high risk of being abused. Due to  this classification, any person who obtains, sells or uses marijuana for their personal use, is in violation of the law.

Are these laws fair for Florida?

We cannot make a moral judgement, but we do know with its many benefits and medically viability, the use of marijuana should not be as negatively perceived as it is currently.

With the November election quickly approaching, it is more important than ever to take a stand; expressing your opinion is the answer to this ever-pressing issue.

Should marijuana be legalized? The decision will be up to you. Join The Holland Club in our movement towards success. 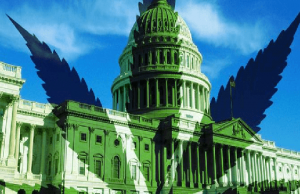 “A Washington D.C., marijuana legalization measure, Initiative 71 was on the November 4, 2014, ballot for voters in the District of Columbia, where it was approved. Initiative 71 permitted the use of up to two ounces of marijuana and the possession and cultivation of up to three marijuana plants.
According to the cannabis advocacy website, Marijuana.com, election law for the District of Columbia did not allow a citizen initiative to mandate the expenditure of city funds. This prevented Initiative 71 from addressing the regulation and legalization of marijuana sales since a regulatory system would require substantial city spending. Thus, Initiative 71 simply legalized possession and personal cultivation. The initiative called for the city council to design an ordinance establishing regulations on marijuana retail sales and enforcement of such regulations.
Although almost 65 percent of voters approved legalizing small amounts of marijuana in the nation’s capital, the fate of the measure ultimately rested with the national legislative body in which D.C. voters had no voting representatives. City and federal laws gave Congress a 30-day window to review the city’s measure and either reject it or let it stand. Congress also had the power to restrict Initiative 71 through its control over the city’s budget.
Since Congress did not act to strike down the initiative, the law went into effect on February 26, 2015”